Fancy having your own Waterloo Medal than read on:

The Waterloo 200 organisation will produce 500,000 replicas as part of events to mark anniversary of Wellington’s victory. It was the first medal issued by the British government to all soldiers who had fought in a battle, regardless of their rank. Now half a million Battle of Waterloo campaign medals are to be issued on a first-come, first-served basis to mark this year’s 200th anniversary of Wellington’s defeat of Napoleon. 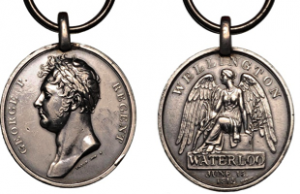 The Waterloo medal issued to soldiers who took part in the historic battle. Photograph: Alamy

Further details can be found at:   www.200waterloo.co.uk/