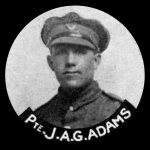 John Alfred George Adams was the son of George Henry (A sawyer in the Timber Yard) and Kate Elizabeth Adams of North Luffenham. On the 1911 Census he was employed as an Under Waggoner on a Farm.

He enlisted in the Yorkshire Light Infantry on 24 June 1918. John trained as a Lewis gunner and went to France on 15 October 1918, where he was wounded in action by a bullet on 4 November.

He died at a hospital in Liverpool on the 14 November and is buried at North Luffenham. His headstone also commemorates his brother in law, John Cox, who had moved from North Luffenham to Derbyshire before joining the army and being killed at Ypres. (See Below) 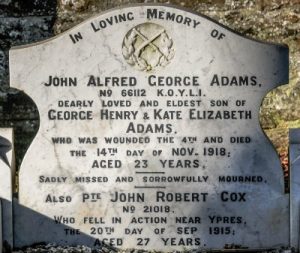 John Robert Cox was born in about 1889 in North Luffenham where his father (John Cox) worked as a Brickyard Labourer in the village brickworks.

At some point the family moved to Ilkeston in Derbyshire. John was married in 1913 to Christabel Adams, also from North Luffenham, whose brother John Adams, died three days after the Armistice from injuries he received in the war and is buried in the village churchyard.

John Cox served in the same Regiment as his brother-in-law which he had joined in January 1915. He went out to the Western Front on 21 May and was killed in September 1915 in the fighting around Ypres.

He is buried in Ypres Reservoir Cemetery, grave XI.E.23. John does not appear on any war memorial in Rutland although he is remembered on his brother-in-law’s headstone in North Luffenham Churchyard. After his death his widow remarried Mr JF Rose in 1922 and moved to Morcott. 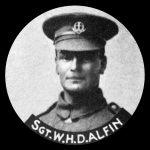 William Henry Delisle Alfin MM was the son of Charles De L’ Alfin (A shepherd) and his wife, Harriett of North Luffenham and was born at Ketton on 10 October 1889.

He joined the 1st Battalion Duke of Cambridge’s Own (Middlesex Regiment) on 13 March 1916, and went to the Western Front on 15 July.

A year later he won the Military Medal for bravery during the Third Battle of Ypres, beating off an enemy attack:

“South of Polygon Wood, on the 25 and 26 September 1917, this NCO performed very useful work by the skillful disposition of his Lewis gun team during the enemy’s attacks, remaining cool throughout, and accounting for many of the enemy. His bravery, cheerfulness and calmness were very inspiring throughout the action.”

He also took part in the Battle of Arras, and was killed by a shell on 26 October 1918, near High Wood on the Somme, less than three weeks before the Armistice.

He was 29 and is buried at Awoingt British Cemetery, grave II.B.22, and remembered on North Luffenham’s war memorial.