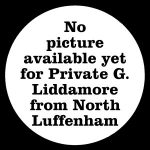 We do not know very much about George Liddamore. His name appears on the war memorial in St John the Baptist Church in North Luffenham but George is not mentioned in George Phillips’ Rutland and the Great War. It maybe he was the 24 year old son of George and Phoebe Liddamore who were living in North Luffenham at the time of the First World War and in their fifties, If he was, then he was living away from home in Grantham and worked as a gamekeeper.

What we can be certain of is that George Liddamore served with the 9th Battalion Royal Warwickshire Regiment in Mesopotamia [Iraq]. The battalion joined the Tigris Corps which made an unsuccessful attempt to relieve the siege of Kut-el-Amarrah.

George was killed on 21 April 1916, a week before Kut surrendered. He has no known grave and is remembered on Panel 9 of the Basra Memorial and in North Luffenham church. 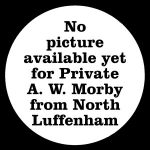 Arthur William Morby was just 19 when he died, one of around 45 “Teenage Tommies” from Rutland to have been killed in the First World War.

He was the son of George and Annie Morby, of North Luffenham, and was a Private in the Gloucestershire Regiment.

He was buried in France, at Hanguard Communal Cemetery, grave II.B.6, and is remembered on the war memorial in the church at North Luffenham. 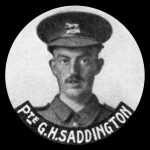 George Henry Saddington was the eldest son of Charles and Anne Saddington and was born in North Luffenham in the summer of 1891. He had four younger siblings. George served with the 1st Battalion Leicestershire Regiment.

On 15 September 1916 the Leicestershire’s were part of 71st Infantry Brigade which took part in an ambitious attack aimed at capturing Morval, Lesbouefs, Gueudecourt and Flers during the Battle of the Somme. The battalion war diary described what happened:

“At about 5.50am two enemy aeroplanes appeared above us but did not stay long. About this time also a tank was noticed on our right moving quietly up to the enemy’s front line. On arriving there he immediately opened fire with his machine guns enfilading the German trenches on either side. He was very heavily fired on by the enemy’s machine guns which apparently had no effect.” Zero hour was fixed for 6.20am. “The leading Companies advanced at the walk at 30 yards distance between lines. A heavy machine gun was immediately opened by the enemy. The support Companies followed in the same formation 300 yards in rear of last wave of leading Company.” Things were beginning to go wrong. “The mist and smoke was terribly thick and allowed no observation by support Companies and Battalion HQ as to exactly what was happening…throughout the advance the battalion suffered very heavily from machine gun fire…and held up by very strong and undamaged wire in front of Quadrilateral [a German strong point].”

The attack petered out and eventually the Leicestershires were forced to withdraw with casualties of 14 officers and 410 men killed and wounded, including four others from Rutland. George has no known grave but is remembered on Pier 3A of the Thiepval Memorial as well as on the memorial in North Luffenham Church. 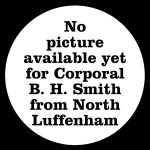 Bertie H Smith was born in Edith Weston in 1882 but records show his parents David and Hannah Smith were living in North Luffenham at the time. He was one of six brothers. Bertie became a joiner and moved to Oakham with his wife Annie Louise and their small son, Cyril Bertie Smith.

He joined the Leicestershire Regiment and served in Ireland after the Easter Uprising with the 2nd/5th Battalion. His death was the result of a tragic accident when he and another soldier drowned in floods as they were collecting stores with a horse and cart. In a letter sent to a Mr S Daniels who tried to help the pair, the Major General commanding the 59th Division based at Curragh Camp wrote:

“I have read with much satisfaction a report of your courageous action on the evening of the 17th November 1916 at Fermoy, when you endeavoured to assist Corpl. Smith and Pte. Jewell of the 2nd/5th Battalion Leicestershire Regiment who were in great danger on account of heavy floods washing past the bridge over the River Blackwater with a Government Horse and Cart. It is a matter of regret that the lives of the two soldiers were not saved, but this does not detract in any way [of] your action, and I desire on behalf of the military authorities, to thank you very cordially for your courageous attempt to help them in their difficulties at the risk of your own life.”

The Commonwealth War Graves Commission has the date of death the following day, 18 November 1916. Bertie, who was around 34, is buried at Fermoy Military Cemetery in County Cork. Graves are not individually marked and so he is named on the Screen Wall with Hedley Jewell who died with him. He is also remembered on North Luffenham’s war memorial. 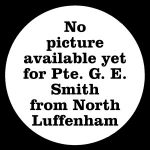 George Edward Smith was the son of Charles and Kate Smith, and had a sister, Lily. He was born in North Luffenham around 1898 and served with the 1st Battalion Leicestershire Regiment.

He died as a prisoner of war at the end of March 1918 aged 19. After the war his body was moved to Mons (Bergen) Communal Cemetery, grave VII.D.12.

He is remembered on the war memorial at North Luffenham.