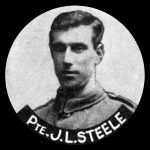 James Leonard Steele was the eldest son of William and Rose Steele and born in North Luffenham on 11 August 1895. By 1911, aged 15, he had moved within the village to live with his grandfather Jeremiah Steele and was a farm labourer.

He enlisted in Oakham, joining the 1st Battalion Coldstream Guards on 5 January 1915, aged 19 years and 5 months old. He went out to France the following October where he took part in the fighting on the Somme.

James was wounded on 16 August 1916 and again on 4 May 1917 during the Third Battle of Ypres. At some point he transferred to the Labour Corps.

He returned home and married his wife Mabel in October 1918. But just five weeks later he was dead. James had been struck down in the big ‘flu outbreak that hit Europe and the world immediately after the war, but his illness was said to have been aggravated by his wounds.

He is buried at North Luffenham churchyard, and has a CWGC headstone. He was 23 years old. His cousin Hugh Steele and his second cousin John Henry Steele also died in the First World War.

His father Amon died in his thirties before the war, and John’s mother Charlotte remarried and the family moved to Northamptonshire.

John Henry was known as Harry and joined 6th Battalion King’s Shropshire Light Infantry. Little more is known about his war service, except that he died fighting in Belgium on 26 June 1916 and is buried at Vlamertinghe Military Cemetery, grave III.B.17. He is not remembered on any war memorial in Rutland. 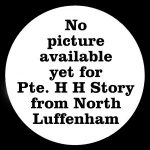 Herbert Henry Storey was the second youngest Rutlander to die in the First World War, aged just 16 years, ten months and ten days, after he was injured during the Battle of the Somme.

The youngest of all to die was William Clifton. Herbert, whose cousin Albert also died in the war, was born at at Ketton on 26 December 1899, the son of Herbert Storey and lived at New Town Cottages in North Luffenham. He enlisted in Mansfield, where he worked as a coalminer, on 3 May 1915, claiming to be 19 years, 127 days.

He went to France on 6 March 1916 with the 16th Battalion Sherwood Foresters (Notts and Derby Regiment). During the Battle of the Somme, on 14 October 1916, 100 men of the battalion were sent to act as stretcher bearers during an attack by 118th Brigade on the Schwaben Redoubt near Thiepval. It is likely this was the action in which Herbert was wounded.

He was admitted to hospital in Rouen with a head wound before being evacuated home. He died in St George’s Hospital, London, at 12.45am on 22 October. Herbert was buried two days later at Nunhead Cemetery in South London and is remembered on North Luffenham’s war memorial. 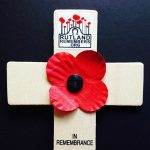 Charles Edward Thornton was initially rejected for military service because of a heart condition. But he made another attempt to join up and managed to enlist in the Lincolnshire Regiment just three weeks after the start of the First World War.

He was younger of two sons of Lewis and Mary Thornton of North Luffenham. Lewis was a butcher in the village, but both his sons trained to be bakers. Charles worked in Nottingham and then in Wragby, Lincolnshire, while his brother George worked in Loughborough.

Charles attested for the army at Lincoln and joined the 6th Battalion Lincolnshire Regiment. He was sent to Malta and then to Gallipoli when the British made new landings at Suvla Bay in an attempt to break the deadlock in the fighting which had been going on since April. He was shot in the stomach and died from his wounds on 11 August 1915.

He has no known grave and is remembered on Panel 47 of the Helles Memorial as well as at home in North Luffenham church. His brother George, who had joined up the day after him, was discharged from the army in October 1914 as medically unfit.